This content (or portions thereof) describes ISBoxer 42! ISBoxer 42 is newly released, and we are working on updating parts of the documentation for the new version. 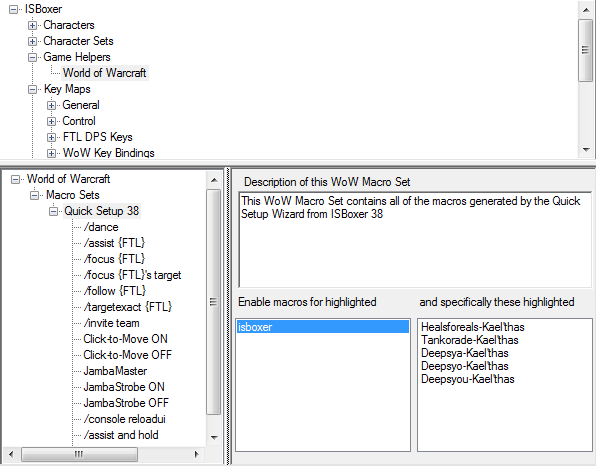 When World of Warcraft is selected on the first step of the Quick Setup Wizard, it will create a WoW Macro Set called "Quick Setup 42," as seen in the images to the right. Not only are the macros contained within the Macro Set used in the core ISBoxer setup for World of Warcraft, they also provide a great set of examples, as well as a foundation for use in your Mapped Keys.

It can be useful to create additional Macro Sets if you need to keep certain macros or Key Combinations separated (e.g. class-specific macros when using the Pro Config), and want only certain Characters/Character Sets assigned to them.

Note: If the game is currently running, you will need to reload the user interface (/reload) before any changes take effect.

Note: The WoW Macro Set is stored in a special text format called XML. For whatever reason, if the XML formatting is "broken" (e.g. using a document type or paste site that changes the raw text format), then the Macro Set will not be able to be properly imported.

Note: Alternatively, a single macro can imported the same way by right-clicking on the name of the Macro Set you wish to import to, rather than the Macro Set header.

Things in the top pane in ISBoxer