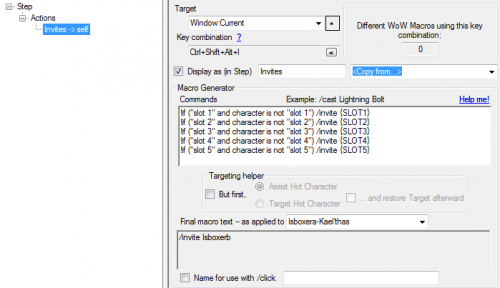 A WoW Macro Action is a special action for World of Warcraft (as the name implies, this type of Action will not work for other games). This is the same as a Keystroke Action, but generates a WoW Macro specifically for each Character in each Character Set in the ISBoxer Addon; The Addon will assign a WoW Key Binding (configured by the Key combination) to the WoW Macro.

This cannot be used to place a macro on an Action Bar -- those macros must be created in-game. The macros created by ISBoxer are invisible, and can be up to 1023 characters in length, the same as macros created by other Addons.