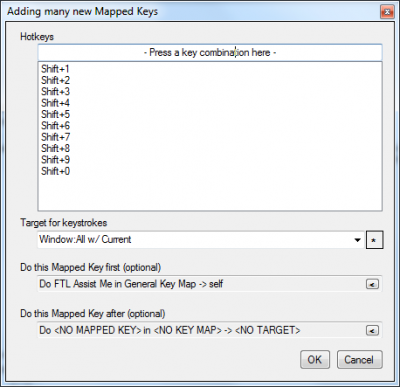 Setting up "FTL" is painless with ISBoxer, for World of Warcraft and RIFT!

I'm not going to go into detail explaining the acronym itself because that's not important; The concept is such that no matter which Character you are playing, you should be able to have all of your other Characters follow, assist, or target you. There are several ways of achieving this. The original method was to set WoW's Focus Target to the Character in the current window whenever switching windows; However, using that method meant the inability to use the Focus Target for anything else (e.g. crowd control), and sometimes caused problems if the Focus Target had not changed to the new Hot Character.

Traditional implementation of FTL involves picking a different combination of Ctrl, Alt, and Shift to indicate the Hot Character, then configuring an in-game macro interpreting the modifiers to perform the assist -- for each spell to be cast. That implementation drastically reduced available key space by requiring each individual spell to be on its very own key and with no other bindings on that key, because the modifiers were fully reserved for FTL. ISBoxer's Quick Setup Wizard eliminates these problems by separating the assist from the spell cast, but still allowing it to automatically assist when casting any spell. This enables the use of existing action bar buttons and hotkeys with no restrictions on the use of modifiers, also meaning that no special macros for multiboxing need to be created in-game.

As of ISBoxer 35, Mapped Key virtualization can be used to implement FTL in a way that does not involve the use of modifier keys, and can be extended to games other than World of Warcraft [1].

So.. how does it work in ISBoxer and how does this help me?

Automatic assist works by pressing the assist button in each of your other windows, causing them to target your target, before sending the button to activate your ability. "FTL" just means that "the assist button" can be one of several actual assist buttons, rather than just one button. To assist window 1, ISBoxer would press Left Shift+Backspace, window 2 would be Right Shift+Backspace, and so on using a different Key Combination for each Character.

ISBoxer automatically generates the WoW Macros for your team, and will automatically send the right combination to assist the right toon. You can make any of your existing Action Bar buttons perform auto-assist, just by using the Many new Mapped Keys feature, as shown to the right and described in the WoW Quick Start Guide. You can press your existing Hotkey, such as 1 or 2, or shift+1 or shift+2, alt+1 and so on (pretty much any key combo), and ISBoxer will turn that into an auto-assist and followed by a broadcast of that key. It's really that simple.