Multiboxing is playing multiple characters together in a multiplayer online game like EVE Online, EverQuest, Lord of the Rings Online, RIFT, World of Warcraft and many other free and pay-to-play games. The term multiboxing comes from referring to a PC as a "box", with the traditional method of multiboxing being a couple of PCs side-by-side with their own monitors, keyboards and mice.

Multiboxers have successfully used ISBoxer to conquer full "group" (sometimes called a party) content alone in many games including RIFT, World of Warcraft, EVE Online, Lord of the Rings Online. Multiboxers also often team up together to take down even more challenging "raid" content with fewer human players than is typically required.

The ISBoxer multiboxing software makes it easy to multibox on one PC, or on multiple PCs, with a range of games. 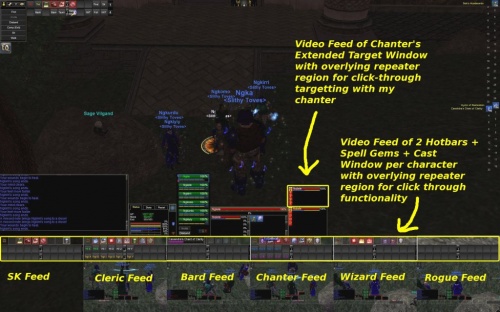 Multiboxing EverQuest with ISBoxer. Image by ISBoxer user Alge, from a post on the ISBoxer.com forums.

Multiboxing at the most basic level is simply having multiple characters, and pressing buttons or clicking in each game window to move or activate abilities as if you were actually two individual players. The trick is to be able to do this efficiently enough, and respond quickly enough, to take on the game's content that you would like to experience while multiboxing.

Multiboxing software offers a range of features designed to improve your ability to configure your game and hardware, see your game windows and important details within them, as well as interact with your games. Key cloning, mouse cloning and key mapping are a few common multiboxing software features. ISBoxer makes it possible to also add Widgets inside of your main window (or even on another monitor) to show a live and fully interactive view of an important part of another game window, or even automatically clone mouse clicks on certain hotbuttons or other GUI elements in the game to the other windows, and a host of other features that are unavailable in other multiboxing software.

Hardware devices can also be used effectively in multiboxing, including Input Devices with extra buttons that can be programmed through ISBoxer, or hardware multiplexors that can broadcast your keystrokes to other PCs (also a function available in software).

Playing multiple characters is not mentioned in the EULA or Terms of Service for most MMORPGs. The rules of the games generally apply to the player himself, and to each character in play as individuals. This means that a multiboxer is expected not to harass other players as a function of harassment being against the rules, rather than because he is multiboxing, and likewise is expected to not automate or "bot" the gameplay or otherwise cheat.

See Is ISBoxer allowed? for further reading on the politics of multiboxing.

Individual players who encounter a multiboxer for the first time in Player vs Player combat sometimes complain about the practice being allowed, their emotional response to being killed by something (or someone) they were not prepared to deal with. However, a true multiboxer is just a group of characters and has an extremely limited set of tools within the game to do even the most basic things, and a multiboxer is vulnerable to a number of defensive and offensive abilities an individual player might have. For example, an area-effect "fear" spell may cause the multiboxer's characters to run in different directions -- while individual players are good at recovering from this, a multiboxer cannot individually move each character at the same time and must rely on features such as auto-follow to regroup the characters.

Multiboxing teams come in all shapes and sizes. The most common multiboxing teams are only two characters, usually with one "main" character specialized in dealing damage (DPS) or surviving lots of damage (tanking), and one specialized in healing or other utility. 2-character teams like this are usually initially chosen for Player vs Environment (PVE), rather than Player vs Player (PVP), as a first foray into multiboxing.

Beyond the 2-character team, multiboxers add additional characters to provide additional utilities, fill additional roles and, of course, do more damage faster. By selecting the right combination of characters with the right abilities, it is possible to defeat most MMORPG content intended for small groups. Up until multi-group content, this is usually one healer, one tank, and the rest DPS (a typical group).

PVP teams are often either filled with the same class to make things easy to set up, or are crafted around a specific set of abilities that complement one another.

System requirements for multiboxing are pretty much the same as for playing one game, except multiplied per game instance you want to run. Generally, if your PC can launch one instance of the game you want to multibox, it is probably capable of launching two -- if that is what you think of as the "minimum". Performance (often measured in frames per second, or FPS) will largely depend on whether or not your CPUs and GPUs (video cards) will have power and memory to spare.

Other than that, ISBoxer's Video FX feature requires Windows Vista with its Aero feature enabled.

As a general rule of thumb for multiboxing modern 3D games on one PC, you want at the minimum one CPU core, 2GB RAM per game instance (3GB for WoW retail) and maybe 2GB more for the OS (this means 5 boxing WoW retail on 16GB is very tight, and usually a performance headache), and a middle to high grade video card with approximately 512MB vRAM per game instance for DX9, 768MB for DX11/Legacy options. 2GB vram per game for DX12. This can still be quite variable depending on the game and what settings you want to achieve. Older games like EQ can get away with lower spec requirements. Newer games like Diablo3, or updated games (like WOW) will need more power.

Note: Some Intel chips, such as the i7, will list having more CPU cores (logically) than they physically have. These extra CPU cores do not count as part of our recommendations as they cannot fully power a game instance and must be paired with a physical core (See i7 CPU: Assigning Separate Cores to Different Clients). As a general "rule of thumb", a hyperthread (logical) core is approximately 30% of a physical core. So a desktop i7 CPU generally counts at around 5.6 physical cores.

If you intend to do streaming at the same time, you will need more CPU grunt, more memory, and probably a second computer to do the encoding and uploading.

Should I use two video cards?

You certainly do not need two video cards to multibox, but if you are looking for ways to improve your graphics quality an extra GPU can help you do this without sacrificing performance. But there is a catch.

There are two ways to use two video cards, either separately with monitors attached to each card, or in SLI/Crossfire mode where they attempt to work together.

See GPU Management and HOWTO: Tweak your framerate for more information on this topic.

Multiboxing at 4K resolutions will require a lot of vRAM and GPU power. SLI of 1070s, 1080s or Titans will probably be required, especially if you want a little eye candy.