Difference between revisions of "WoW:Interact with Target"

This content (or portions thereof) describes ISBoxer 42! ISBoxer 42 is newly released, and we are working on updating parts of the documentation for the new version. 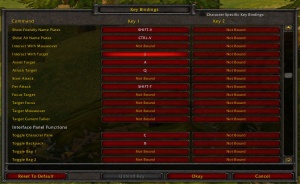 Interact with Target (IWT) is a configurable World of Warcraft hotkey. This hotkey can be set in the in-game Key Bindings window, in the Targeting section. There is no default hotkey configured for Interact with Target, it must be manually set!

The Interact with Target key binding does the same action that would otherwise be performed with a right click, including:

When combined with Click to Move, Interact with Target will also cause your character to face and move toward your target; This is an important feature for multiboxing, since it means less manual movement when doing the above activities. Your character will automatically stop moving if the action is performed (i.e. it reaches the target and "interacts"), but will not otherwise change direction or stop moving unless manually interrupted. Unfortunately, this limitation of the feature causes some undesirable side effects, especially in the cases where your target is moving, or your character otherwise slightly misses the target, because your character will continue running in that direction unless manually interrupted! Using the Interact with Target hotkey again will restart the process, where once again your character may stop moving or miss the target again, and this will continue as many times as you use the hotkey -- potentially making your character run circles around its target.

The Standard Mapped Key set up by the Quick Setup Wizard temporarily enables Click to Move in all but the current window, disabling it after performing the Interact with Target. (See Using the Standard Configuration for instructions)

A common (but not necessarily recommended) configuration for Melee characters will leave Click to Move permanently enabled, so that Interact with Target can be spammed with any DPS key(s). This is provided by ISBoxer 42 as "Auto-Interact with Target"

ISBoxer's Quick Setup Wizard sets up most of what you need to use the Interact with Target feature. However, World of Warcraft does not provide a default key binding. You will need to configure one now. In the game's Key Bindings options screen, scroll down to the Targeting section and find Interact with Target. It doesn't really matter what you set the key binding to, but I've found G to be convenient.

Configure the Key Binding in the game, in each window 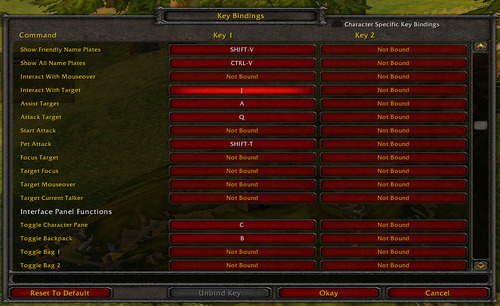 Finding Interact with Target in the in-game Key Bindings window

Configure the Hotkey and Key Binding in ISBoxer 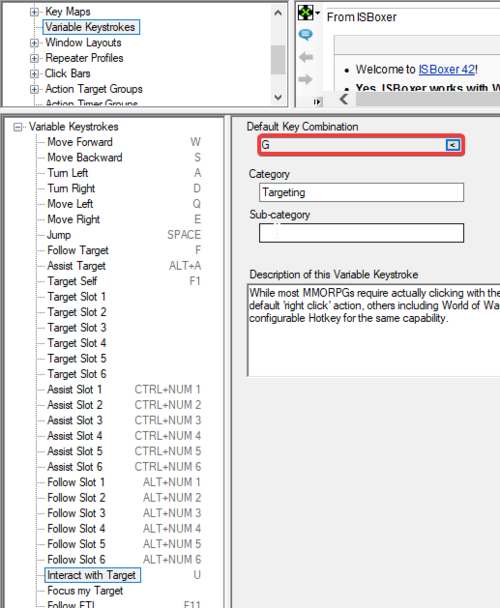 After setting up the key binding in the game (really, please do that first to avoid confusion), you will need to tell ISBoxer what key combination that is, and set up a Hotkey in ISBoxer itself, to perform the broadcast:

After you Export again and ISBoxer reloads the configuration in the game, your new IWT key should work. Target an NPC and press the new hotkey, and your characters should all interact with it.

In World of Warcraft, Interact with Target behavior varies per class, not spec, when using it on a hostile target, and the following should be taken into consideration when using it, in combat.

Note: "No Restrictions" indicates that a character of that class will always run into melee range, with no additional restrictions, just as Interact with Target behaves when using it on a friendly target.